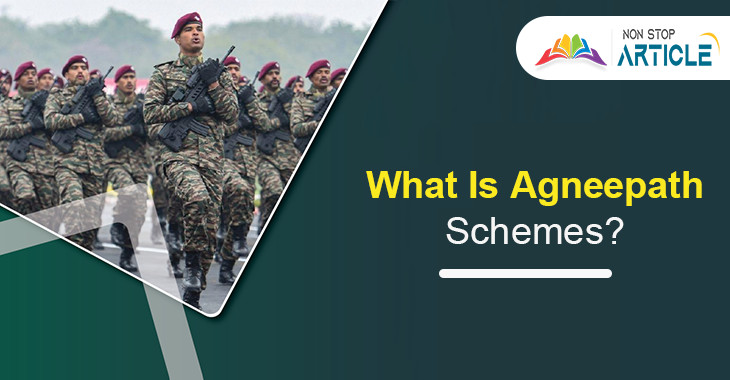 It goes without saying that today innovation is the inherent key to success. Keeping this motto in mind, the Government of India has introduced a new scheme – the Agnipath scheme in the armed forces.

Let us try to learn more about this scheme and see how things unfold:

Everything you need to know:

The literal meaning of Agnipath is ‘Path of Fire’. It is no secret that a job in the armed forces is like the path of fire as it involves a lot of hard work and strenuous activities. Often, a lot of individuals even lose their battles at the time of rigorous training. The Agnipath scheme introduced by the Government of India is aimed at the soldiers below the rank of commissioned officers. This scheme is included for the three services of the armed forces – Indian Army, Navy and the Air Force.

What will happen under this new scheme?

The Government of India had earlier notified that under the aegis of the new Agnipath scheme, around 45,000 to 50,000 soldiers will be offered job annually at the age of 17 and a half. However, these soldiers will have to retire by the time they are 21 years old. That is to say that they will serve the nation for a span of 4 years. Among the ones who are recruited annually, only 25 per cent will be entitled to full service for 15 years under permanent commission. The rest 75% will have to retire. Now, the country is experiencing widespread agitation, as a number of aspirants believe they will silently suffer because of this new rule. They believe they will be left nowhere after they retire just at the tender age of 21.

How will they be different from the rest of the soldiers?

Since the government recently introduced this new scheme, the new defense recruitment policy has been given a clear nod by the Cabinet Committee on Security and the scheme will come into effect immediately. The soldiers recruited under this new scheme will be given the title of ‘Agniveers’

This reform which is touted as some kind of an overhaul of the decades old selection process might be seen as a fresh breath of air! This policy will however be used to recruit those under the rank of officers. These Agniveers will also wear a different kind of emblem as part of their uniform.

Several former Army veterans have disapproved or vented out their otherwise feeling on this issue. Among those horrified is retired Major General G.D. Bakshi who tweeted that he was absolutely “flabbergasted” moreover he urged the government “For God’s sake, please don’t do it”

According to media reports, Lieutenant General Vinod Bhatia, a paratrooper and former Director General of Military Operations offered his disapproval too. To a number of media, he said – “I take risks, but this is not a risk, I would have taken. The Fauj ethos may change.”

Why such an abrupt scheme?

One newspaper report incidentally suggests that the government has to nearly spend Rs 12 crore for a soldier, and thus by introducing this new scheme, it is trying to save the expenditure.

What is the Agnipath Recruitment Scheme?

The name ‘Agnipath Recruitment Scheme’ literally translates to – Agnipath Yojana. In English, it is referred to as ‘Path of Fire Scheme’. Any kind of job in the armed forces requires a lot of courage. Therefore, it is like a path of fire indeed. The Agnipath Scheme is a new scheme unveiled by the Government of India on 14 June 2022. The sole purpose of this scheme is to recruit soldiers below the commissioned officers rank. This new regulatory policy is to take effect from September 2022.

What are the benefits of Agnipath scheme?

The benefits of the Agnipath scheme is pretty relevant, to say the least. It is like a unique opportunity for youngsters to serve the country. It is definitely some sort of contribution towards the development of the nation, in its truest sense. The Armed Forces have a reputation of selecting passionate and dynamic youth. For the number of Agniveers, an attractive financial package lies ahead.

Are girls eligible for the Agnipath scheme?

Yes girls will be considered under this new scheme. Whereas, women have not yet received the nod.

Uttar Pradesh CM Yogi Adityanath and Madhya Pradesh CM Shivraj Singh Chauhan have announced that the Agniveers will be given “priority” in state police service. Meanwhile, Assam CM – Himanta Biswa Sarma has said that every Agniveer who are permanent resident of the state of Assam will be directly absorbed in Assam Police at the end of their stints with the armed forces.

Defence Minister Rajnath Singh has declared that the recruitment process might kick off within the next few days. On the other hand, Home Minister Amit Shah has welcomed the move and has twitted that a large number of youth will be benefitted from the Agnipath scheme.

Whether this particular move by the government brings a lot of results in their favour or the move backfires – we shall know that gradually. It is a matter of time before we come to know about its merits or demerits.

← Newer Post
What Are The Essential Qualities You Must Look For In a Montessori?
Older Post →
Protect the Car and the Wallet From an Mot Failure